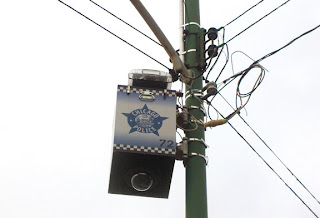 "It was terribly dangerous to let your thoughts wander when you were in any public place or within range of a telescreen. The smallest thing could give you away. A nervous tic, an unconscious look of anxiety, a habit of muttering to yourself—anything that carried with it the suggestion of abnormality, of having something to hide. In any case, to wear an improper expression on your face… was itself a punishable offense."
- George Orwell, 1984, Book 1, Chapter 5

US surveillance began centuries ago with the concept of slave passes, which allowed slave-owners to monitor and control the mobility of their "chattel." Yet the slave pass system was sometimes subverted by the rare slaves who could write, such as Frederick Douglass. These literate slaves could create their own passes and might thus gain freedom for themselves and other slaves. Trafficking in passes and "free papers" soon became a burgeoning business, one that the slave system grappled with for nearly two centuries.

From slaves, the history of surveillance next turns to the infamous Chinese Exclusion Act of 1882, which restricted Chinese immigration to the United States. All Chinese laborers were forced to register with the government and subject themselves to being photographed and fingerprinted. A whole apparatus of surveillance was created.

In the 1920s, government surveillance spread to political radicals, especially workers trying to organize union activity. J. Edgar Hoover headed this government surveillance unit which would later become the FBI. As the 20th century advanced, computer technology proved a powerful enhancement to the regime of surveillance. This allowed most devices and databases to be monitored and evaluated, including automobiles, Your car can be tracked by GPS, and your spending habits can be gleaned from accessing your credit card records. Internet and email are monitored in the workplace and cameras are just about everywhere.

For this show artists will explore the history of surveillance and how this affects us at this present time. They will in turn create work dealing with this theme which will include 2D work, installation, and new media.