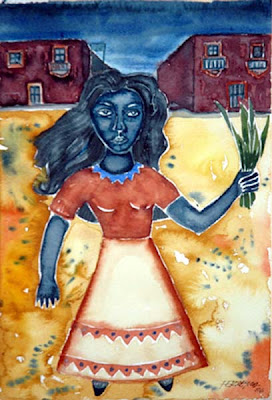 IMAGES THAT MERGE
A one man exhibition by Chicago based artist

Born in 1957 in Morelia Michoacan, Mexico Roberto was influenced by the imagery of the daily workers on the one end, while also by the fantastic images of animals, mermaids, indugenous simbols and other Mexican iconography. These all come together in his recent work, drawings, prints and paintings. he has infused these mixed memories with his contemporary life in exciting Chicago. Numerous critics have written about his work which also has been publish in different art books such as "Mexican Printmaking in the 20th Century" by Hugo Cobantes as well the most recent "El Taller de Grafica Popular" by Humberto Musacchio, FCE.