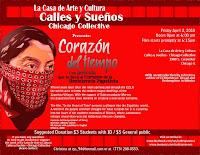 Fifteen years later after the rebel uprising and through the EZLN, the world came to know the modern mayan dwellings of the  Zapatistas Villages.  Directed by Subcommandante Marcos, they have been working on creating a new social narrative.

The film, "In the Heart of Time" allows a glimpse into that world...to see the people, the struggle for what it is,  it travels into the heart of autonomous village, and reveals that the rural and indigenous life in the mountains in the southeastern parts of México are changing.

"Sonia (Rocio Barrios) is engaged to be married: Her dowry is a cow. Out walking in the jungle, she exchanges a sultry glance with guitar-playing Zapatista rebel Julio (Francisco Jimenez). Such a relationship reps a security threat to both the community and the rebels and is thus forbidden.

Meanwhile, the men struggle to bring electricity to this isolated jungle region as the women fight against the encroachment of government forces. Sonia's grandmother Zoraida (Dona Aurelia) lectures the girl on traditional virtues and the necessity of sacrifice, but Sonia has come to the conclusion that such sacrifice is not for her."