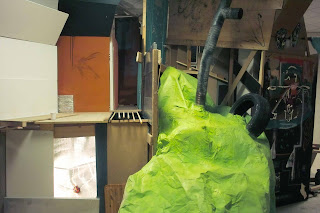 ETERNAL COLORS and A CONVERSATION BETWEEN TWO PEOPLE


The intrepid CHURCH PORCH team hijacks the BEN RUSSELL (GALLERY) space for ONE night to bring you TWO exhibitions for the price of one.  Admission is free.


From 6-8pm we will be showing the installation ETERNAL COLORS by ASPEN COURT, poetic detachment used to describe a philology of color, tongue-in-cheek references to domesticity and the carpet samples themselves, cast-away icons of a homebuyers dream.  The thin mosaic of multiform rectangular shapes bisect the space from floor to wall, forming a right angle that climbs to the ceiling, touching it.  The right-angle hints at the room that is not there, and the minimal arrangements of color encroach upon a space where their use-function is obsolete, and it is precisely this uselessness that make possible the patterned forms of restrained color, old hues of familiar settings, displaced, to reveal their true beauty as objects.  Before this arrangement stands a pedestal offering an old blank book whose pages have curled from neglect.  The open-most page lays awry but tells us nothing.  The empty book commands attention to itself as an object, and without words or pictures, this book, like the carpeted array of colors behind it, point elsewhere-


At 8pm, mid-exhibition, will will de-install ETERNAL COLORS and install A CONVERSATION BETWEEN TWO PEOPLE, by BRENDAN ANTON JAKS which will be shown from 8pm-10pm.   Gesture and theatricality, when syntax fails due to ineptitude or by the means which express ideas fail or fall outside the scope of language, emerges gesture.  Emotive, flabbergasted, or otherwise, and also receding into mechanical form (think of traffic cops), indeed the automaton can live in gesture and take the form of ritual.  "You aren't understanding what I'm trying to say!" waving my hands at your face, the relationship between energetic youth talking, gesticulating and Android Nazi Troopers.  Whatever the relationship, gesture is usually taken for granted.  But not today as JAKS reveals to us through the installation of one sculpture gesturing to another (or is it one sculpture with a schizophrenic personality?) ending with a moment of silence between two people.


-BRENDAN ANTON JAKS (b. 1983, USA) lives and works in Amsterdam, NL
currently studying Fine Art at the Gerrit Rietveld Akademie.  When not busy with
University he can be found reading tarot in Vondelpark.


special thanks to Ben Russell and Michael Thibault 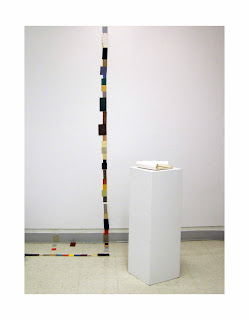