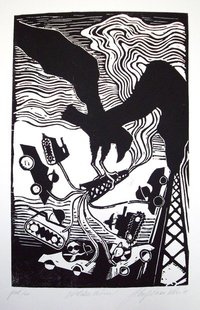 1538 W. Cullerton Street, (2000 South, East of Ashland Ave.)
Chicago, IL
This is actually the Second Retrospective of the art of John Weber; the first having been 20 years ago this month at the Valparaiso University Museum of Art, in Valparaiso, Indiana. That was presented as a "mid-career" Retrospective.

John Weber's career in art has continued, as focused and passionate as it was when he painted his first public mural in 1969, "All Power to the People", (since destroyed), in the courtyard of St. Dominic's Church. Influenced by the great Mexican muralists, Diego Rivera, Jose Clemente Orozco, and David Alfaro Siqueiros, he went on to co-found the Chicago Mural Group which continues today as the Chicago Public Art Group.

Whether the issue has been the war in Vietnam, the repressive regimes in Nicaragua and El Salvador, the suffering of the people of Vieques, Puerto Rico,or, currently, the barbed wires and walls between Israel and Palestine and between Mexico and the U.S.A., John Weber's art serves as a visual manifestation of the cry for justice and humanity which is all too often heard around the world.

Strong images create strong, emotional responses in the hearts and minds of viewers of John Weber's prints, collages, and charcoal drawings, which will make up the selections for this unique exhibit.

Carlos & Dominguez Fine Arts Gallery is honored to host this Retrospective of John Pitman Weber, an important artist, known nationally and internationally. I know that his images will touch your heart, and your soul, as they have touched mine. --Len Dominguez, gallery Director.

This exhibit will continue until February 25, 2010
Carlos & Dominguez is a private gallery.