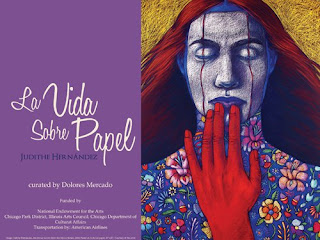 
As one of the pioneers of the Chicano Art and Los Angeles Mural Movements of the 1970's, Judithe Hernández is regarded as one of the important visual artists of the period. She was the only female member of the seminal and influential East Los Angeles artist collective "Los Four" that included the late well-known California painter, Carlos Almaraz, whom she met when they both attended graduate school at Otis Art Institute.
She has exhibited extensively in the United States, Europe, and Mexico, including the ground-breaking first exhibition of contemporary Chicano Art in Europe: Le Démon des Anges. Her public works include the Los Angeles Bicentennial Mural (1981) which was commissioned by the Los Angeles Bicentennial Committee to officially commemorate the 200th anniversary of the city's founding in 1781. In contrast to her mural work, her studio work has always been pastel on paper. The lush color and haunting imagery of the work prompted one art critic to compare it to two legendary artists, saying it was a "unique and beautiful blend of Rivera and Rousseau".
Posted by lapsus5 at 6:03 PM