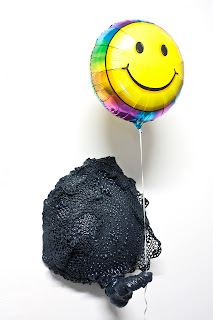 ACRE and SLOW present an opening reception on FRIDAY, JANUARY 27, 2012 from 6-9pm at 2153 w 21st Street, Chicago 60608. ACRE has partnered with SLOW to host NOT COOL OR STOIC: new works by CHUCK JONES and ACRE resident MATTHEW SCHLAGBAUM, the next installment in ACRE's year-long series of exhibitions by 2011 ACRE summer residents.

NOT COOL OR STOIC
Colored theory. Not color for color’s sake, but named colors for linguistic associations.

Matthew Schlagbaum begins with greyscale, a faux grisaille, and slips in a technicolor magic schism. Unlike the filmic precedent, Matthew is invested neither in generating delight, nor affirming faith in humanity or individuality. More like Matthew is illuminating the shameless manipulations that drive familiar stories.

Glittering gold. Black and white and read all over.

Chuck, a gorillalike hulking man always decked out in Carhartts and work shoes, spins a yarn with earnest ennui. Deeply sentimental moments become meditational gems. But his laser focus meanders—the moment was truly heart-felt, but Chuck is open enough to respond just as deeply to the next. Follow his lead and you may end up with your emotional guard puddled around your ankles, not knowing the differences between true grit, heart-strings, or even what is funny.

Chuck and Matthew both reside somewhere shaken, somewhat glum. Not cool or stoic. Each embraces his own direct emotional responses, and calls upon a viewer to dive into a moment. But each is driven toward a view of reality that pulls back the curtain to reveal something as it is complete with contradictions, flaws and untidy conclusions.

CHUCK JONES was born and raised inside the beltway that circles our nation's capital, now lives and works in Chicago with his family.

More information about Chuck Jones can be found at www.babygorilla.com.

MATTHEW SCHLAGBAUM is a multidisciplinary artist currently residing in Chicago, IL. Originally from Florida, he received an MFA in Fiber and Material Studies from the School of the Art Institute of Chicago, as well as a BFA in Sculpture and a BA in Psychology from the University of South Florida. His work investigates materiality, color, and object-ness in relation to the way in which value is assigned to concepts of emotionality, interpersonal relationships, success, and self-identification. He often implements objects and imagery considered generic or inauthentic in order to tease out the complex emotional relationship we have with these materials.

More information about Matthew Schlagbaum can be found at www.matthewschlagbaum.com

SLOW GALLERY is an alternative exhibition venue for contemporary art. Not quite an apartment gallery, not commercial. Art that leans away from hipster toward introspective and vulnerable (read slightly nerdy).

More information about Slow Gallery can be found at paul-is-slow.info

ACRE (Artists’ Cooperative Residency and Exhibition) was founded in 2010 with the ambition to provide the arts community with an affordable, cooperative, and dialogue-oriented residency program. The residency itself takes place each summer in rural southwest Wisconsin and brings together artists from across disciplines and levels of experience to create a regenerative community of cultural producers. Over the course of the following year ACRE endeavors to further support its residents by providing venues for exhibitions, idea exchange, interdisciplinary collaboration, and experimental projects.