Sparked by an ongoing habit of collecting discarded cigarette packs, NEWPORT ROOM, presents a stubbornly incomplete taxonomy of anonymity, suspicion, and excess. Including an installation of screen prints, several hundred archived menthol cigarette packs, and a grouping of cast-object assemblages, "Newport Room" reveals Erschen's preoccupation with the ambiguities of trash and the folly of urban legends. 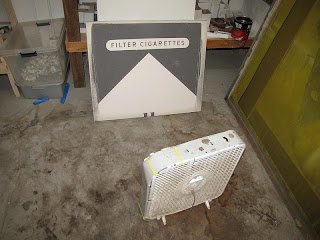 PAUL ERSCHEN is an artist and musician who lives and works in Chicago. Erschen's recent studio practice involves sculpture, printmaking, mold-making/casting, and archiving. Recent exhibitions include: "West Plaza" at Document Gallery, "Group Hug" at Co-Proseperity Sphere, and "Recipes for Mold And Sun", a collaboration with Rachel Ettling, at Roxaboxen.
More information about Paul Erschen can be found at www.paulerschen.com

The Hills Esthetic Center is both a conventional and organic exhibition space located within a complex of artist’s studios and audio recording facilities on Chicago’s west side. Focusing on emerging artists and local arts initiatives, the space aims to promote a breadth of cultural production and invention in the service of independent artistic expression. We value a relaxed artist-controlled environment with the potential for the interaction of critical and social dialogues.

More information about The Hills Esthetic Center can be found at thehillsestheticcenter.com