BOYS' LIFE brings together photographs, sculptures and found and ephemeral objects that reflect on personal memories and popular culture to explore and examine perceptions of masculinity and cultural archetypes. Pragmatic images and symbols extol and critically articulate various iterations of masculinity in the American middle class. With a muted gaze that guiltily but inevitably verges on exploitation, these images and objects strive to retain evidence of Blumberg’s shared cultural heritage and participation in the events in and around the works while also addressing how the subjects view each other. Created with a playful spirit, the works serve as a commentary and celebration of American leisure in the language of popular culture and working class signifiers. 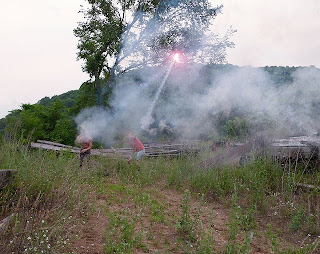 ADAM BLUMBERG (b. 1978, lives Philadelphia) - Raised amongst the horseradish fields and abandoned coal mines of a rural St. Louis suburb, Adam Blumberg is an avid baseball fan and enjoys collecting smashed pennies. He earned an MFA from ICP-Bard in 2007 and a BFA from The School of the Art Institute of Chicago in 2002. From 2004 to 2005, Adam participated in the Research Program at the Center for Contemporary Art in Kitakyushu, Japan. His work has been exhibited in England, Germany and Japan in addition to the United States, including recent exhibitions at Tiger Strikes Asteroid, Philadelphia, PA and Unit B Gallery, San Antonio, TX. He is currently curating an upcoming exhibition at Storage Gallery, Philadelphia for the summer 2012.