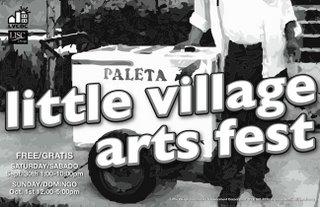 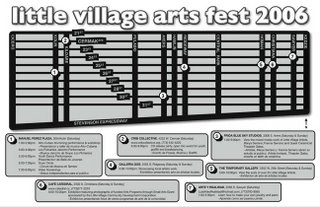 This will be Rose’s first solo exhibition entitled, "¿Le molesta que dé de pecho aqui?" in Chicago. The "broken" Spanish title comes from her recent performance piece she did in the Canary Islands. Rose explains, "I wrote and performed in Spanish where I de-mythologised Christopher Columbus, it was at opening of the exhibition ‘Olvida quien soy’ at Centro Atlántico de Arte Moderno in Las Palmas, the audience grew irritated and participatory while I read and reread this text in broken Spanish."

Rose will be a visiting artist and lecturer with the Liberal Education Department at Columbia College Chicago, Institute for the Study of Women and Gender in the Arts and Media, Columbia College Chicago and the SAIC Visiting Artists Program and Performance Department. Her work reflects on the cultural, economic and political differences that mark the world today, along with identity-related and ethnic issues. Rose graduated from the Fine Arts Department from the University of Witwatersrand, Johannesburg, South Africa. Her career as an artist started at that moment, with a series of exhibitions that included the Johannesburg Biennial (1997) and most recently, her work has been included in the critically acclaimed exhibit, "Africa Remixed" travelling in museum venues around the globe.

Sipho Hlati, Velile Soha and Ernestine White represent three generations of Cape Town based print media artists in South Africa. The work explores history, identity politics and artistic experimentation. Their exhibit histories include museums such as the South African National Gallery and galleries such as Bell-Roberts Gallery. These works had traveled with an exhibit curated by Jesus Macarena-Avila and Anna McCullough Tyler with Beacon St. Gallery, Elgin Community College and Northern Illinois University. Amongst the exhibited work, White will show her newest series. She explains: "In my recent body of work titled ‘Banal Illusions’ I explore the relationship between the camera, myself and my immediate environment in an effort to begin to understand the role (power) one has in altering one’s perceptions of reality. At first glance, the environment seen ordinary; they are places that signify a human presence."

Sonia Báez-Hernández holds a MFA in Painting and Drawing from the School of the Art Institute of Chicago, an MA in Sociology, from University of California, Los Angeles, and an ABD from the European Graduate School and a BA in Political Science from the University of Puerto Rico. She has exhibited her work at the Museum of Modern Art, Dominican Republic; Juchitán Casa de Arte y Cultura & Calles y Sueños, Mexico and the Printmaking Society, Los Angeles; International Miniature Exhibit Del Bello Gallery, Toronto and other locations.

Báez-Hernández will be showing documentation of her performance work, "Trans-Body" with Polvo. She explains: "’Trans-Body’ unveils multiple fragments of my body transformation and my becoming-woman. My body enters into a rigid territory through breast cancer, mastectomy, chemotherapy, and breast reconstruction. Breast cancer or illness is aporia, anguish and confusion." Performance, choreography, voices and costume by Sonia Baez-Hernandez, videography and editing by Jean-Rene Rinvil with music and voice by Diego Pérez. She will be a visiting artist with the Liberal Education Department at Columbia College Chicago where her documentary, "Territories of the Breast" will be premiered (co-directed and co-produced by Jean- Rene Rinvil/ Sonia Baez-Hernandez and music by Diego Perez). For details see www.vf-media.com

Day of The Dead 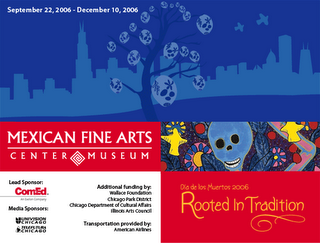 Back to Basics- Part One
''DRAWING'' 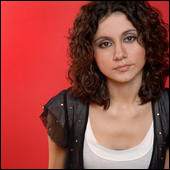 About Lupe...
Lupe Martinez is a singer, songwriter, and musician. She is currently a member of the two bands, Almost Rosario and Alla. She's been playing guitar and singing about 10 years, and writing her own songs for the past seven. She performs at various Potbelly Sandwich Works locations throughout the city and she sometimes performs at weddings, parties and bars. For details on Lupe's projects and to listen to her work: www.myspace.com/lupesings 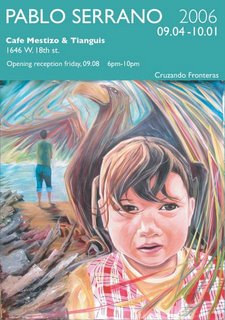