A lesson in love [or, a cheat code] is a key sequence, password, or series of steps to be entered within a video art work [video game] that will provide the player some object, ability, or access to a level or location within the game that is secret, hidden, or that would have otherwise been unobtainable or unavailable to the viewer [player] [12] 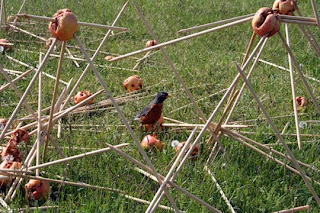 Private viewings by appointment*
*The performance of "Untitled (Lesson)" by Nance Klehm will be presented at approximately 8:00pm during the opening reception.

-----
ABOUT THE SHOW:
This one goes out to all you bloated-stomach Thanksgiving celebrants, you 4am Best Buy Black Friday tent-pitchers, youDamien Hirst diamond skull collectors, you non-recyclers and you Gucci Mane enthusiasts. These are foodstamp and slim wallettimes after all, and by now it should be clear that the best way forward is on your tiptoes, preferably in some nice soft leather moccasins. Your friends at BEN RUSSELL are here to help you focus your art consumption by 2/3rds, to find a use for all yourapple picking surplus and, if you do end up throwing anything away, to make sure that it ends up in that compost pile out back. With our help, you'll realize that gaudy neon flourishes are so 2008, that neo-minimalism persists only because Minimalism was abandoned far too soon, and that even "less is more" can be LESSENed to much less.

It's been a tough month or two at BEN RUSSELL, but now that our BEER hangover is finally over, we can clearly see thatBEN RUSSELL : LESSEN is in fact a lesson of the most useful kind, in five parts:

1) ABATE: From a Paiute American Indian reservation in California, ecologist/urban forager/gardener Nance Klehm gives us a virtual lesson on how to reduce and reuse our trace in the material world.
2) DECAY: Casey Lurie presents Apple Structure 2, the second iteration in a series of outdoor structures designed to be built using only quarter-inch dowel rods and apples as joints.
3) DIMINISH: In which the cash money ice glitz bling of hip-hop and R&B's greatest is subjected to the minimalist compositional tendencies of Joe Grimm's sonic minimalism/process art installation.
4) MINIMIZE: Complicating the transcendent ambition of high modernism's abstract expressionism, Ben Foch employs a common house painting roller to create a large scale gestural painting with an economy of means.
5) REDUCE: Michael Snow's 1967 seminal structuralist 16mm film Wavelength, comprising of a 44:00 zoom across a NYC loft, is screened in its 2003 15:00 video iteration as WVLNT (Wavelength For Those Who Don't Have the Time).

Please join us for the glorious-yet-humble 5th installment at BEN RUSSELL as we prepare for that long cold Chicago winter by clearing our collective bodies/minds of distractions and focusing on LESS(EN). Nothing, after all, is permanent; everything willLESSEN if we give it enough time...

BEN FOCH was born in Park Forest, IL. in 1977. He received his BFA from The School of the Art Institute of Chicago in 1999. Foch's practice is diverse, utilizing several formal devices to reach his ideological ends, specifically the boundaries and definitions of artistic expression and the minimum criteria for an objects claim to high art. He has exhibited nationally and recently at the now defunct Pilsen space VEGA ESTATES and the Hyde Park Art Center. Foch states: "The next logical space for pictorial investigation is economic. Formal distinctions are fundamentally economic distinctions and perception is the currency of the future." He lives and works in Chicago.

JOE GRIMM is a Chicago-based artist who uses sound and light to investigate sensory experience and its construction. His work applies rational, structuralist tools in pursuit of irrational, ecstatic results. Performances and installations frequently take the form of meditations: resonance, repetition, friction, and disintegration become the hypnotic focal points in an attempt to reach a state of inner tranquility and heightened attention to sonic minutiae. He has shown at CAPC Bordeaux, La Casa Encendida Madrid, BMOCA, The Boston Cyberarts Festival, and in basements and squats worldwide.

NANCE KLEHM is a radical ecologist, designer, urban forager, grower and teacher. Her solo and collaborative work focuses on creating participatory social ecologies in response to a direct experience of a place. She grows and forages much of her own food in a densely urban area. She actively composts food, landscape and human waste. She only uses a flush toilet when no other option is available. She designed and currently manages a large scale, closed-loop vermicompost project at a downtown Chicago homeless shelter where cafeteria food waste becomes 4 tons of worm castings a year which in turn is used as the soil that grows food to return to the cafeteria. Nance has shown and taught in Mexico, Australia, England, Scandinavia, Canada, the Caribbean, and the United States. Her regular column ‘WEEDEATER’ appears in ARTHURmagazine.

CASEY LURIE is an artist and designer based in Chicago. Born in Goleta, California in 1976, Casey is a recent graduate of Northwestern's Art Theory and Practice department (M.F.A., 2009) and has also studied at the Glasgow School of Art in Scotland, and California Institute of the Arts (B.F.A., 1998). A trained cabinet maker and carpenter Casey's work takes many forms and often explores the tension between man-made constructions and natural processes. Casey's work has been exhibited in the US and Asia.

MICHAEL SNOW is considered one of Canada's most important living artists, and one of the world's leading experimental filmmakers. His wide-ranging and multidisciplinary oeuvre explores the possibilities inherent in different mediums and genres, and encompasses film and video, painting, sculpture, photography, writing, and music. Snow's practice comprises a thorough investigation into the nature of perception. He played a major role in the "structural" film movement with such works as Wavelength (1967), Back and Forth (1969), and La Région Centrale (1971), exploring the world through deliberate and explicit decisions about formal approaches. Snow has had solo exhibitions and/or film retrospectives at the Venice Biennale, New York's Museum of Modern Art, the Paris Centre Pompidou, Cinémathèque Française, and elsewhere.
-----
ABOUT THE SPACE:
BEN RUSSELL is a newly formed art space in the Pilsen neighborhood of Chicago. Co-curated by artists Brandon Alvendia and Ben Russell and situated around the front two rooms in the apartment of its namesake, BEN RUSSELL began presenting a series of month-long 5-person shows on Memorial Day Weekend in the year 2009. Participating artists are invited to produce and exhibit work that is in accordance with the title/theme of each show, the name of which will be derived entirely from the 10 letters in the words "ben russell." Future shows may include BEN RUSSELL : BLUENESS, BEN RUSSELL : REBELS, and BEN RUSSELL : US. In keeping with the structural conceits of the French Oulipo language group and the spatial and material limits of what is effectively a rented apartment, BEN RUSSELL maintains a set of restrictions for all exhibiting artists by which:

BEN RUSSELL features a rotating roster of Chicago-based and non-Chicago-based artists and will be open for viewings one night a month and by appointment, as needed.
Posted by lapsus5 at 7:59 PM No comments: 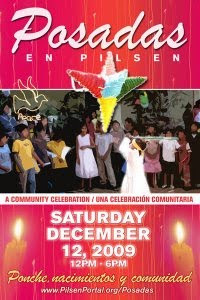 Pilsen Posadas
Saturday, December 12, 2009
5:00am - 6:00pm
18th Street, Pilsen neighborhood of Chicago
Chicagoans can get a jump on this year’s Holiday celebrations and the city’s winter festival season at the first ever Posadas en Pilsen festival on Saturday, December 12, 2009. The Posadas en Pilsen festival will be a daylong event that will take place from 5:00 a.m. to 7:00 p.m. along 18th Street and extending into some arterial streets in Pilsen, the heart of Chicago’s Mexican community. The event is being organized by the Pilsen Commerce Roundtable, a group of small businesses united to expand and strengthen commerce in Pilsen.

There will be many opportunities throughout the day for people to join in the day’s festivities. The day’s activities begin at 5:00 a.m. with the celebration of La Virgen de Guadalupe, patron saint to Mexico, at the neighboring churches with music and mass, attendees will be given the opportunity to eat a traditional Mexican breakfasts at participating restaurants and cafes. The highlight of the event is a walking tour along 18th Street, the main commercial corridor in Pilsen, beginning at noon. Attendees will then have the opportunity to visit 25 participating businesses and sample traditional Ponche, a Mexican hot beverage consisting of sugar cane, fruits, and cinnamon, all the while judging nativity scenes either hand crafted by local artists or by the business. There will be awards given to both the best Ponche and Nativity Scene and will all culminate at an outdoor festival at Plaza Tenochtitlan on the intersection of 18th Street and Blue Island Ave. where attendees will be given a complimentary Aguinaldo, traditional gift-bag given to the attendees who make the pilgrimage throughout Pilsen filled with various traditional candies and fruits, also the children will be given the opportunity to participate in breaking of a piñata that same evening.

“We wanted to create this event for Pilsen because it’s one of Chicago’s largest Mexican communities, and the Posada tradition is very important to the Mexican and Latino community” said Hector Saldana, one of the event’s organizers. A variety of businesses from Pilsen have signed up to participate and compete including restaurants, cafes, galleries and other local business.
Participating businesses:

For more information please visit www.PilsenPortal.org/Posadas
Posted by lapsus5 at 5:25 PM No comments: