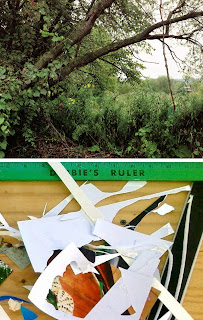 FRONTISPIECE: Becket Flannery’s exploration began with Thomas Hobbes’ Leviathan; prior even to the text, a frontispiece depicts the new “artificial man” whose body is the people and whose soul is sovereignty.  This cryptic image introduces and also summarizes Hobbes’ thought.  The frontispiece was not simply a decoration, it was a way of reconciling political thought with the sensible – i.e. the creation of political vision.  Lately, the rupture between vision and thought has been too severe to repair so easily.  One of the most recent political manifestos is written by a committee that proclaims itself to be invisible; and what use does the image-driven political simulacrum have for text beyond the purely tactical?

Rather than the strict correlation of image and text, the intention of the collages in Frontispiece is different.  Rather than focusing on the loaded image-symbols, those privileged nodes of interpretation, they play with the forms that frame and suggest this referentiality. These cues to the civic still linger, as we are constantly asked to engage with our political images, without being troubled with what they might mean.  These text-less frontispieces then imply new ideas and social visions; they are images looking for authors.

THE UNCANNY IMAGINATION: Grant Ray continues his experiment-based practice of documenting photographically the pseudo scientific investigations into unexpected forms of communication from unexpected places. For this latest set of photographs, Ray returns to the wooded rural areas of North America to get closer to an unblemished natural landscape in humorous exploration to locate marks, traces, or signs that could be construed as natures attempt at communication.

From long hikes in the woods to discover naturally forming patterns of flora and faunas that reflect /mimic the night sky in the form of constellations. To late night psychotherapy sessions with a flashlight, paper, and coal dust producing plant shadowgrams that are then read as Rorschach test. Or the uncanny patterns of marks from tacks and staples from flyer's, ads, job postings on information boards located in the sleepy Wisconsin towns of Steuben, Boscobel, Ferryville, and Soldiers Grove. As whimsical and humorous as the photographs are, they stand to poetically reflect nature as a site of human projection of our desires, ambitions, and destruction. A testament to the environment and the often complicated and politicized issues that effect it.

GRANT W. RAY received a BFA from the School of Visual Arts in New York City, and a MFA in photography from Columbia College Chicago. Ray has exhibited at Barbara & Barbara gallery in Chicago, Spoke gallery in Chicago, the Richmond Center for Visual Arts in Kalamazoo Wisconsin and most recently at CGIS Gallery at Harvard University in Boston. Grant is currently an instructor of Digital Photography at Northwestern University.

BECKET FLANNERY studied Art and Political Theory at Swarthmore College.  In 2009 and 2010, he has been an assistant for Yale University’s Institute for Studio Studies summer painting intensive.  He lived and worked in Chicago for three years.  He currently lives in Philadelphia.

More information about ACRE can be found at www.acreresidency.org
Posted by lapsus5 at 9:12 PM No comments:

For the closing of "Remake".... You can't get this 90 minute 1978 movie on Netflix, GreenCine, nor any library in Chicago, folks... I finagled a deeply discounted copy right from director Rick Schmidt (thanks, Rick!). Also, Jacques Hammer and Wanda Drug possibly will play a few covers! You may want to bring the sitting/reclining tool of your choice (chair, pillows, etc).

"In another favorite, "1988: The Remake," Schmidt held an open-call audition for his restaging of the musical "The Show Boat," resulting in something like a crackpot San Francisco talent show. Sued by MGM for titling his film after theirs and required to remove all mentions of the name, Schmidt replaced every utterance of 'showboat' with the sound of a foghorn, which of course only made the movie funnier." - Amy Yao, Top Ten, Artforum Jan 2011.

Private viewings by appointment*
*The performance by Sandy Allen will begin at 8:00pm during the opening reception.
-----
ABOUT THE SHOW:
Gesundheit!  It seems that you've still got the sniffles, Friend, and what with the winter of our discontent snowing down upon us again andagain and again, it's clear that you need something more than a box of Kleenex to lift your spirits.  And so, without further ado, we're taking the "BLESS" out of "God BLESS you" and putting it back into BEN RUSSELL.  In preparation for such an historic event, we had an Orthodox priest sprinkle holy water in the screening room, got some German Pagans to mark the snow in the sculpture garden withgoat's blood, asked our Jewish ex-girlfriend to recite prayers while lighting the Shabbat candles in the exhibition space, and took part in a gang initiation rite in the kitchen where we were punched really hard in the forehead.

After all, art is BLESSing (which, coincidentally, is also the term for a group of unicorns) - art is brightness, art is hope, art is buoyancy of spirit in the Newest Year.  In the year of our (land)lord 2011, we've assembled an array of minor altars upon which to worship and be worshiped - we've erected a selfless monument by which to orient ourselves in the darkness, a beacon of positive communication (CASTLEMAN) with which we can broadcast our message to the world.  BEN RUSSELL : BLESS is self-realization through rigor and ritual, it is a document of time-in-space, re-spaced (CHAN); it is sage incense and Cherokee flatbread and self-taught customs derived from a disappearing culture (ALLEN); it is an inquiry into Painting and Form and the very real possibilities of a center that has expandedoutward from itself (LEDGERWOOD).  Last but certainly not least, BEN RUSSELL : BLESS is a video-shout-in-triplicate, a protest against social and spiritual conservatism, a conversation that we simply cannot allow to become familiar (WOJNAROWICZ).

We are BLESS, we are future, we are now - take our hands and join us, let the light of Art shine upon us all.

ABOUT THE ARTISTS:
SANDY KAYE ALLEN lives in Chicago.  She is deeply worried about the dying heritage and fading language of her ancestors, and she actively engages in the important artifacts and stories of Native American life, drawing from ritual and custom in an effort to educate others through her work. Intrigued by the sounds of the Cherokee language and the instruments that accompany it, she weaves these elements together with samples of her own recordings and her own voice.  Moving between fact and fabrication, she teaches herself folk dances and writes love letters to her pretend Native American boyfriend in Tsalagi, the Cherokee language.  She learns Native American recipes to cook meals for her friends; she sings the self-taught Cherokee morning song of her ancestors and often contemplates the magic of being able to fluently speak the Cherokee language. She dreams of one day finding and connecting with the Cherokee elders and using their knowledge to inform the world around her.
DAYTON CASTLEMAN is an artist who was born in New Orleans, worked extensively in Philadelphia, and now resides in Chicago, where he received his MFA from the School of the Art Institute. He has installed work at numerous venues in Philadelphia, and has exhibited his work in Chicago at Co-Prosperity Sphere, DePaul University Museum, and Jennifer Norback Gallery, among others, as well as curating exhibitions at Alogon, Spoke, and The Zhou B. Art Center. He has shown work at the International Sculpture Center in New Jersey, and at galleries from Los Angeles, to New York, to Rotterdam.

DEREK CHAN's paintings, works-on-paper, and durational performances record the minutia of daily life while combining historical narratives to reflect on such themes as spirituality. He develops his work through a highly personal, meditative practice that most recently that explores the spiritual and poetic nature of the Four Corners region, where Arizona, New Mexico, Utah, and Colorado meet. Chan’s recent exhibitions include Thirty and Eight with Golden Age, a 12 x 12 at the Museum of Contemporary Art Chicago and collaborations with Theaster Gates at the Whitney Museum of American Art during the Whitney Biennial.
Expanding elements of modernist painting, JUDY LEDGERWOOD uses color as the primary agent to gain a critical vantage point on its trajectory. Early in her career, Ledgerwood began incorporating traditionally feminine pastel colors into her paintings in an attempt to challenge and undermine the historically male-dominated tradition of abstract painting. Today her compositions include a compound circular motif typically associated with the decorative arts tradition. Ledgerwood's Blob Paintings push painting toward sculpture in a further exploration of the meaning of form. Ledgerwood is the recipient of a The Richard H. Driehaus Foundation Award, an Artadia Award, a Tiffany Award in the Visual Arts, a National Endowment for the Arts Award, and an Illinois Art Council Award. Her work is represented in public collections including the Art Institute of Chicago, the Metropolitan Museum of Art, the Museum of Contemporary Art Los Angeles, the Milwaukee Museum of Art, the Museum of Contemporary Art Chicago.  Her degrees are from the Art Academy of Cincinnati, BFA, and the School of the Art Institute of Chicago, MFA.

DAVID WOJNAROWICZ was a painter, photographer, writer, filmmaker, performance artist, and activist who was prominent in the New York City art world of the 1980s.  Wojnarowicz died of AIDS-related complications on July 22, 1992 at the age of 37.  In November 2010, G. Wayne Clough, Secretary of the Smithsonian, removed Wojnarowicz's short silent film A Fire in My Belly from the exhibit "Hide/Seek: Difference and Desire in American Portraiture" at the National Portrait Gallery after complaints from the Catholic League and Rep. John Boehner.

ABOUT THE SPACE:
BEN RUSSELL is an art space in the Pilsen neighborhood of Chicago.  Co-curated by artists Brandon Alvendia and Ben Russell and situated around the front two rooms in the apartment of its namesake, BEN RUSSELL began presenting a series of month-long 5-person shows on Memorial Day Weekend in the year 2009.  Participating artists are invited to produce and exhibit work that is in accordance with the title/theme of each show, the name of which will be derived entirely from the 10 letters in the words "ben russell."  Future shows may include BEN RUSSELL : LENS, BEN RUSSELL : REBELS, and BEN RUSSELL : US.  In keeping with the structural conceits of the French Oulipo language group and the spatial and material limits of what is effectively a rented apartment, BEN RUSSELL maintains a strict set of restrictions for all exhibiting artists by which:

BEN RUSSELL features a rotating roster of Chicago-based and non-Chicago-based artists and will be open for viewings one night a month and by appointment, as needed.
Posted by lapsus5 at 9:43 PM No comments: