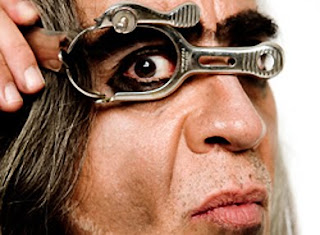 Presented by:
Center for Teaching Excellence
Ellen Stone Belic Institute for the Study of Women and Gender in the Arts and Media
Center for Community Arts Partnerships
LGBTQ Office of Culture and Community
National Performance Network

As part of the first Critical Encounters Artist Residency, renowned Mexican-American performance artist Guillermo Gómez Peña and his San Francisco-based “trans-disciplinary arts organization,” La Pocha Nostra, will lead an intensive artist workshop on campus that incorporates and challenges ideas of race, gender, faith, and boundaries. Inspired by the past work of La Pocha Nostra, the project aims to offer participants a dynamic and multiple-stage mentorship opportunity, initiated and developed over several months, and culminating in a public presentation.

Critical Encounters is a college-wide civic engagement initiative intended to synchronize conversations between the school and the community in an ongoing dialogue around a central, socially and culturally relevant issue each academic year. Fact & Faith explores how we negotiate the tension between the need to believe and the need to know, examining the concept of truth, what shapes it, and how it is expressed.

The intensive will take place from October 23 – 30, 2009. The residency culminates in the Chicago debut of La Pocha Nostra’s most recent work “Corpo Illicito” on Friday, October 30, 2009. From December 2009 to March 2010 participants will take part in additional workshops with Roberto Sifuentes, of La Pocha Nostra, and other artists/individuals through a partnership with Links Hall (datesand times to be determined by organizers and participants). On April 15–16, 2010, the workshop attendees will re-convene with La Pocha Nostra to rehearse their final participant-created performance, which will be presented at the 6th Annual Gender Fusions on Saturday, April 17, 2010.

Students are encouraged to work with their departments to use this opportunity as an independent study.
Applications due by Wednesday, September 23, 2009 5pm
Chosen participants will be notified by October 9, 2009 5pm 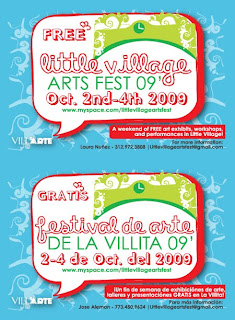 The Fourth Annual Little Village Art Festival is looking for you!

For the past four years VILLARTE along with the help of Artists, Photographers, Performers, Educators, Students and others have converted empty storefronts, businesses and community centers into spaces of art and creativity for this three‐day event! Please join us as we once again celebrate the beauty of our community!

We are looking for all mediums of visual and performance art to be part of the The Fourth Annual Little Village Arts Festival running Saturday, October 4th and Sunday October 5th, 2009 with an opening night celebration on Friday, October 3rd, 2009.


We are looking for:
We are accepting works from Artists in all levels of experience
from:

Our goal for the Little Village Art Festival is to reach all Artists living, working and/or inspired by the community VILLARTE calls home.


How to Submit Artwork:


Festival Details:
Posted by lapsus5 at 9:29 PM No comments: 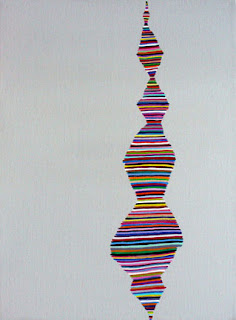 "James Jankowiak paints organically, each work becoming a ritual of repetition. The organic composition of each piece is part of the evolutionary arch of the manner in which he operates. Specifically, the artist is interested in how simple form can evolve from one incarnation to the next - each step a mutation that replicates what science reinforces about our beginnings and the larger history of the universe. His paintings stand as a testament of a personal meditation on the process of being a living thing, of beginnings and endings, creating and evolving."
- Michael Gardner

James was born and raised in the Back of the Yards neighborhood on the south side of Chicago. Although his early forays in the Chicago graffiti scene proved to be influential upon several generations of spray can artists, he always took risks with his art and continues to evolve as a painter and installation artist. His work has been exhibited at several notable institutions such as the MCA, Northwestern University and the SAIC’s Roger Brown Gallery, and also continues to be accessible to the community through his work as a teaching artist with Urban Gateways, A.R.T. and Gallery 37. http://www.jamesjankowiak.com/

Since moving to Chicago from Montreal in 1996, Mike Nourse has been working as a visual artist, creating wall art in the form of gel medium transfers, and short videos using found footage. Combining old materials and aesthetics with new tools and techniques, Mike's art speaks to the past while pointing to contemporary art explorations. He is driven by the transition between an analog and digital world, so all of his art aims to combine old and new.

Separate from his transfer work, Mike Nourse's video shorts have been in festivals around North America and Europe, including Resfest, the Toronto International Media Art Biennial, Netherland’s Impakt Festival, the San Francisco Independent Film Festival, and the Vancouver International Film Festival. Mike’s work can be found at mikenourse.com.

Mike obtained a BA from Depaul University in 1999 and MFA from the School of the Art Institute of Chicago in 2002, and has taught visual arts to undergraduate and graduate students at the same schools. In an effort to work on his teachings, in 2003 he co-founded a visual arts organization for new and emerging Chicago artists, called the Chicago Art Department (chicagoartdepartment.org). CAD has just entered its 5th year of existence, and as part of this active non-profit, Mr. Nourse has spearheaded dozens of programs and exhibitions. Mike is also the manager the studio programs at Marwen (marwen.org), overseeing close to 90 visual arts programs for under-served youth while curating roughly 10 exhibitions per year. http://mikenourse.com 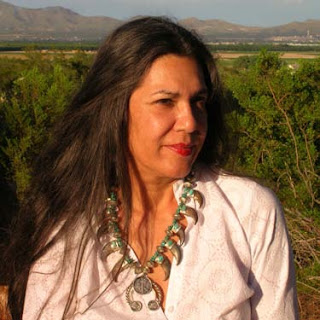 The MáS Memoir Writing Workshop welcomes back previous participants. It will
include first time participants. Together, we’ll take a look at writing-in-progress, learn workshop method and discuss new writing tips and techniques.

In memoir, the reader must be persuaded that the narrator is writing honestly, whether
or not he/she is, is secondary. It doesn’t matter as much ‘what happened’ as what you
make of what you remember may have happened.The workshop will consist of exercises, which help us to know how to get started when desiring to work on a memoir essay. We’ll talk, we’ll laugh, we’ll cry. We’ll vent. We’ll write from our hearts and our minds. And then, we’ll learn to get rid of all the sentimentality and leave on the page what is important for the reader to know about your memoir. FOUR hours with Ana Castillo, poet, novelist all around genre-jumper. Persons interested must submit 1 pg
writing sample to apply.18 yrs. and up.

All Inquiries and to Apply:
email: anacastilloworkshops@gmail.com
Cost: $175 per person
Limit only 15 per workshop
* Exact locations and times will be given once applicant has been accepted.
Posted by lapsus5 at 4:54 PM 3 comments:

The Declaration of Immigration mural 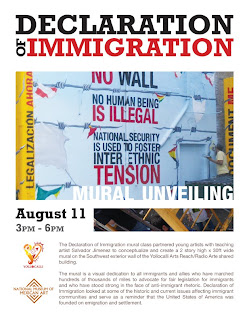 The mural is a visual dedication to all immigrants and allies who have marched hundreds of thousands of miles to advocate for fair legislation for immigrants and who have stood strong in the face of anti-immigrant rhetoric. Declaration of Immigration looked at some of the historic and current issues affecting immigrant communities and serve as a reminder that the United States of America was founded on emigration and settlement. 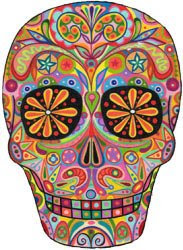 In the wake of the death by gunfire of artist Jeff Abbey Maldonado, Jr., Michael Hernandez De Luna, Miguel Cortez and Pete Rodriguez called a meeting to organize a community response to the rash of shootings in the area.


There will be a march/parade against Pilsen violence on Sunday, August 9, at 3:00 p.m. starting at Juarez High School, on 22d & Ashland.

Following the march, "Casa Sandia" (old Pilsen-ites Sandy and Eric) will be welcoming the group into their yard for celebration, on the corner of 16th and Loomis.

Tell everyone with the guts to make a difference!

*******
There will be another planning meeting Aug 5 Wednesday for sign making bring materials.
CASA ATZLAN 1831 S Racine @ 7PM.
********
Some details are still up in the air, so check back for updates as things develop.
But please come, and bring art, music, creativity and a good attitude.
Posted by lapsus5 at 8:41 PM 1 comment: