A Night of Poetry in Pilsen


Antena is proud to present:
A Night of Poetry
and Open Mic


OPEN MIC for poets will be available...all themes welcomed. We will set aside five minutes max or one poem per open mic reader. Open Mic from 7-7:30:pm

Carlos Cumpián was named among the Chicago Public Library’s “Top Ten” most requested poets. His poetry has been published in small press magazines as well as numerous anthologies, while Carlos’ books have received positive reviews for their contributions to Chicano literature. 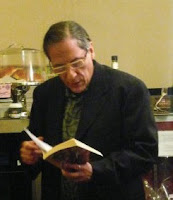 Cumpián is also the editor of March Abrazo Press, which has been instrumental in the longevity of the small press and establishing its presence as an independent publisher of Latino and Native American poetry.

Some of his most recent poetry appears along with poems by Martin Espada, Luis Alberto Urrea, Achy Obejas and David Hernandez in the premier edition of The Hummingbird Review.

Among the honors Carlos has received include the Gwendolyn Brooks Significant Illinois Author Award and a pair of Community Arts Program Grants from the city of Chicago.

Leticia Cortez was born in Guanajuato, México and grew up in Chicago. As she grew older, reading and writing became her escape. At a city college she met a teacher who encouraged her to write and soon discovered poetry through writing short stories. She studied Literature and Science at 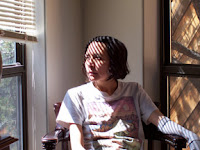 The University of Illinois in Chicago and would later teach both subjects for over a decade at Truman College. Since 2009 she has resided in Santa Fe. She edited and co-funded the bilingual publication ¿Hasta Cuándo? which is now online. She writes poetry, book reviews and articles for Polvo, Area,  Lumpen times and Contratiempo magazines. Considering poetry as a form of expression that crosses cultures as well as space and time, her poetry is a process of thoughts and images, which arrange themselves in words and worlds.
Posted by lapsus5 at 6:36 PM No comments: