Lambsbread:
"Lambsbread hail from Delaware, Ohio, just far enough outside of Columbus to make a difference in how they do things. This free-noise-rock trio delivers terse, intensely stoned-out yet urgently shadowy, snowballing sets that are built out of a miasma of malicious twin guitars and complex, often very un-rock drums. Freshly back from the Thurston Moore curated All Tomorrow's Party festival in England, as well as a hit and run European tour, expect the band to be in top form. And if they are not, someone will surely help them get there."

Locrian:
"Locrian entrance the listener with their familiar keyboard and guitar drones, building up to intense points where increasingly forceful vocal murmurs enter the dynamic mix --- reaching an apex where beats may be introduced, and where heavier, more metallic guitar riffs, as well as caustic shoegazer sparkles, flex their way out of the shimmering mix"

Jason Soliday + Mark Solotroff:
"In previous collaborative performances, Jason Soliday has utilized the feedback-laden, raw vocal mix from Mark Solotroff's numerous screeching microphones, sculpting and augmenting the extreme frequencies sent into his bank of manipulative electronics. Up against a full bill of deconstructed rock, Soliday is threatening to bring a stringed instrument to the party, but he just cannot be trusted, can he? In an case, expect some high highs and some low lows."

Binges:
"With a name that calls to mind excesses, and multiple excesses at that, Binges are a sonic appetite that shred, strip and tear elements of song and toss them glistening on a grill of malleted skin. Anthony Decanini wrenches steaks of disembodied noise from bass loops, tape interjections, and vocal caterwaul, while barefoot and punishing Chris Robert herds them home with impeccably mis-timed drummadocio. You
should eat." - Evan Woodward

http://www.buskerchicago.com/events/archive/id-44/
Posted by lapsus5 at 7:51 PM No comments: 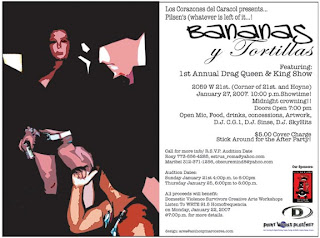 *Cover Charge $5.00
**Stick around for the afterparty!

Diane Herrera is our featured performer. Diane's work
as a writer and performer includes several ensemble pro-
jects with Teatro Luna as well as ¡Salsation! Her newest
project is the sketch comedy troupe Midtown, which will
perform at the Chicago Sketch Comedy Festival 2007 this
January. For complete bio.
OPEN MIC signup begins @ 7p.m. and is limited to the
first 8 participants. We encourage you to dust off your
guitar, dig out your poems, and put on your dancing shoes.
We're an open mic so everything's game: Poetry, spoken
word, music, monologues, shorts y en el idioma que prefieras.
Shy spectators are always welcome. :)
Proyecto Latina is a collaborative between Teatro Luna,
Tianguis Books, and Mariposa Atomica Ink.

Join our network:www.myspace.com/proyecto_latina
For more info or to get on the email list: www.tianguis.biz
Posted by lapsus5 at 4:58 PM No comments:

One way of acquiring an immediate sense of ownership to space, person and moment you are living in life is the simple action of taking a picture of it.

A way to review our tendencies, impulses or compulsions is by going in retrospect and examining our past approaches. In Familiar Portraits, Edra Soto examines the ordinary process of taking pictures of things we love; our pets, our babies, possessions, etc. and project a view on how we reclaim things in life; our sense of ownership.

For this sociological approach, the artist invited a group of friends and family to participate in this visual survey. Soto asked them to donate pictures they have taken of their beloved ones (pets, babies, etc).

All their contributions constitute her personal narrative of what "familiar" means.

Familiar Portraits is presented as an installation (narrow space defined by two walls inside the gallery space) displaying a series of photo collections interrelated by the artist. Some of the photographs are perceptive and others are fictional representation. The fictional representations are digital manipulations created by the artist and are integral to the narrative of this project. In Familiar Portraits, Soto utilize hierarchical classifications, proportions and sets to create visual and organizational schemes.

Soto's interest in classic subjects like portraits, still lifes and landscapes have led her to a personal questioning about the social concept of family, extended families, the people or animals we live with, who we love and why.

Edra Soto was born in San Juan, Puerto Rico in 1971. In 1995 Edra received the Alfonso Arana Fellowship to work in Paris, France for a year. She attended The School of the Art Institute of Chicago where she obtained her Masters degree in 2OOO. Immediately after, she attended a 2 months residency at Skowhegan School of Painting and Sculpture. She has exhibited in Puerto Rico, Paris, Australia, Spain, Russia, New York, St Louis, Milwaukee and Chicago. Some of her latest presentations include a live performance at El Museo del Barrio in New York, a solo show and live performance at El Museo de Arte de Puerto Rico, UIC Gallery 4OO, NIU Museum in Chicago, and Polvo in Chicago. A solo show of her latest instalation will be on view at Polvo, Chicago on January of 2OO7.

Born in southwest Chicago, Adriana Baltazar has grown up to be a near hermit. By night, she is drawing away and by day working in an office to pay off art school debt. As a child she searched for stray pets to nurture and now it appears she is the stray. Find her wandering streets and woods seeking sublime inspiration and escape in vacant lots or other plots of dirt overridden with trees and foliage. For this show she will create a wall size pencil drawing. She explains: "Theres a nice correlation between the impermanence of pencil as a medium and the imminent temporary existence of many vacant lots in our neighborhood. A gallery space in itself is much like an empty lot, impermanent and ever-changing with every exhibit. If I put up objects., ie paintings, viewers can assume that after the exhibit was over, I'd take them back or install them at a new space. The pencil as a medium stills seems to convey a sense of fragility, that it will be erased, replaced. That it is unfinished."

Having been born in Puerto Rico (Mayaguez - wearing bell-bottoms) but raised in the U.S. since the age of five, traveling back and forth from the Island and Chicago, Josue feels that he's somewhere between these two cultures, probably in the Bahamas. Josue (ho.sway, ho.sue.ehh) - grew up between Humboldt Park and Logan square where he was introduced to art thru Graffiti and Hip Hop. He went to Kelvyn Park High School on Chicago's northwest side and then received a BFA with a minor in Biology from the University of Illinois at Chicago. Despite all this, he was awarded an MA from Northwestern University in Art Theory and Practice (the theory being if you practice, you'll improve - thus he keeps trying!). He's now a Chicago-based artist and works in various mediums.