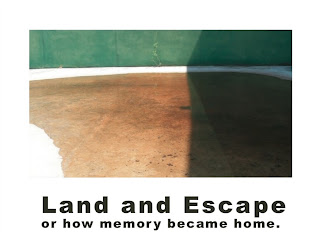 The stories presented in “Land and escape”, are immigrant’s memories exposing their personal journey and adaptation process in foreign countries. Labor is the main motivation of displacement and settlement in each story. The subjects converge in places such as Askeaton, in Ireland, Oaxaca in Mexico, and Chicago in the US.

Concepts of memory, space and homesickness are intimately related in this video series. The exploration of these topics is guided by formal conventions related to documentary.

This project aims to develop a visual narrative based on a collection of audio narratives (voice over) and their connection to related landscapes, as the main source of visual remembrance. In this exploration the project confronts the narrative over its construction, creating different interpretations through formal problems and questions about the subjects motives. 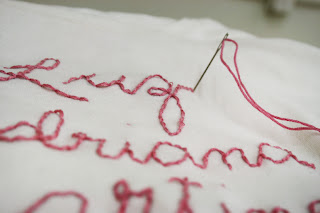 Voces (“Voices”) is a performative installation that addresses the mass femicide of Chihuahua, Mexico. An ongoing act of mourning and protest, I silently sit to the side of the gallery, embroidering the names of individual murder victims into white blouses. Beginning with the first documented victims in 1993, every woman is commemorated with pink thread, referencing the pink crosses that have been erected and painted throughout the city by those who mourn the dead. As the shirts fill the center of the room, memorial shrines and missing person posters line the walls.

Having resided in El Paso, Texas as a child, I find a jarring incongruence between my fond memories of Juarez and the city I now hear about on the news.  I remember the shock, disgust and sorrow I felt when I first became aware of the femicides in Chihuahua. The majority of victims, from low income families, are between the ages of 14 and 30.  Many are raped, beaten, tortured, strangled and sometimes shot to death, their mutilated bodies discarded in the dessert, or left by the highway.  The motives range from gang initiation rituals and sport killings to domestic abuse.

I have dedicated the last three years to embroidering the name of each woman and looking into the individual stories of their lives.  In this way, the act of sewing has become an act of commemoration and mourning.  As the needle pierces each shirt, the suffering of each woman is lamented and recorded in thread. Though their lives and bodies have been so carelessly discarded, these women are not forgotten.  The time taken to hand-stitch one name is a time taken to remember one person; it is to lovingly declare, “No, you are not forgotten.  I remember you.  I value you.”

Voces also aims to make the Chihuahua femicides a very real and urgent dilemma to a United States audience and solicit change on both sides of the border.  Regardless of ethnic background, viewers are endowed with power by mere virtue of their residency on this side of the border.  They assume an implied responsibility as consumers of such companies as Alcoa, General Electric, Du Pont, Ford, Johnson & Johnson and Kenwood, US-owned corporations that continue to operate Juarez factories where many of these women are employed and often exploited – an exploitation directly linked to the social climate of the femicides.  Voces presents viewers with the perspectives of those who suffer under the current system and calls them to recognize their ability to act in the victims’ favor.
Mandy Cano Vilalobos is an artist and educator based out of Grand Rapids, Michigan.  She received her M.F.A. The George Washington University in Washington D.C., and is currently a professor at Calvin College in Grand Rapids.
Roxaboxen Exhibitions2130 W 21st StreetChicago IL 60608
www.roxaboxenminicastle.comGallery hours Saturdays 12-3pm
Posted by lapsus5 at 8:31 PM No comments:

Tejer y Joder
El Stitch y Bitch (SyB) was founded in 2008 as a space for knitters, crocheters and crafters in the Pilsen, Bridgeport and Little Village neighborhoods of Chicago. Currently the group is consists of over 20 members, ages 18 and up. Over the years, the group has evolved into a collaborative art group interested in addressing handmade and Do-It-Yourself (DIY) culture. As DIY culture moves into a contemporary state, many members of the group have found themselves astonished and curious by the inheritance of the handmade skill or the need to carry on the tradition in an adapted manner. Tejer y Joder is a compilation of individual SyB members and independent fiber artists, all interested in the themes of gender, identity, tradition and memory. http://elstitchybitch.wordpress.com/ 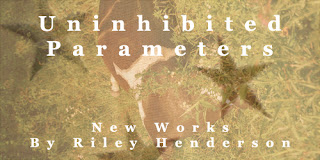 Uninhibited Parameters is a body of new, largely unseen, installation, textile and photographic works by artist, Riley Henderson and co-curated by Jason Frohlichstein. This show stems from ideas and observations on race, class, and cultural difference. The artist’s aim is to relate shortcomings of the current immigration debate to a legacy of dehumanization and marginalization in the U.S, through metaphor and story. “Focusing on the way in which the current immigration debate is framed, my goal is to re-inject that conversation with ideas of humanity. Far too often, people are left out of this debate about people, which has become a very traditional way of marginalizing different ethnic groups and minorities in America. I hope to infer a broader and necessary shift in the thoughts and treatment of people in this country.”
Posted by lapsus5 at 8:24 PM No comments: 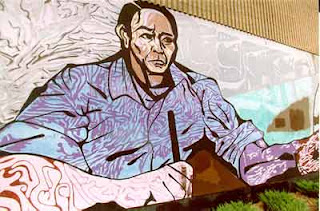 Over 30 years ago, 6 young artists in Pilsen were commissioned to create a mural on the east side of the new high school in Pilsen, Benito Juarez High School. The Mexican community had fought long and hard to have this new school built.

To reflect this struggle, the artists created, A LA ESPERANZA a large mural which evokes the struggles and aspirations of Mexican youth and families. The mural is in the finest traditions of the great Mexican muralists, Orozco, Rivera, and Siqueiros.

Five of the original artists are now professional artists, creating original art, sculptures, murals, and other forms of creative expression. This exhibition brings them back together for the first time, to showcase some of their current work.

CARLOS & DOMINGUEZ Fine Arts Gallery is proud and honored to present this unprecedented exhibit to Pilsen and Chicago.

Food and refreshments will be provided
Information: Len Dominguez at: feriadelaluna@yahoo.com
Posted by lapsus5 at 8:18 PM No comments: