The Whole World is Being Watched!

Exhibit expands on the art of surveillance, how it affects today’s world by Jessica Del Curto
Extra News
Posted on 08-16-2007

When a number of crime cameras began popping up around Pilsen, Miguel Cortez, director of Polvo Art Gallery, found his idea for his latest exhibit.

“I thought I would reach out to other artists and have them react to what is going on,” he said.

The latest exhibit, “Echelon: Who is Watching You,” consists of various art pieces that relate to surveillance, both on a local and international level.

He said all of the artists portrayed surveillance as a negative thing in society.

One piece, created by Drew Browning and Annette Barbier, shows a list of library books projected onto the floor of the studio. These books have been flagged by the government at the Harold Washington Library. As the viewer walks past the artwork, an infrared camera picks up his or her image, placing it behind the text, and tracks whether he or she goes left or right. 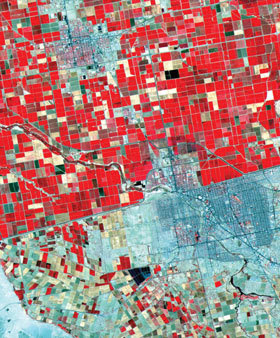 Artist Noelle Mason paid Mexican artisans José Antonio Flores and Jonathan Samaniego to create a 6-by-8-foot rug that is a map of the California-Mexico border. Mason paid the artists what it would cost to bring a family across the border. The point, Cortez said, is to show that satellite tracking is also in existence. “You can access any point on Google Earth and access any building. The whole world is under surveillance,” he said.

Cortez said audience members can take with them what they like from the exhibit.

He hopes people at least gain some awareness of the fact that they are being watched everywhere they go. “They can analyze the good and bad of that,” he said. “It may solve crime in some cases, but you also lose your privacy.”

As far as Cortez is concerned, George Orwell got it right in his book 1984. “He predicted it too soon. Now it’s actually happening,” he said.