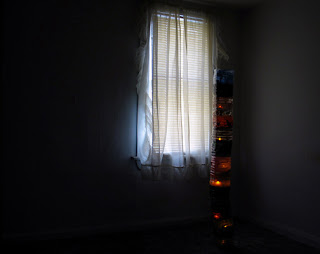 Opening Friday August 5th from 6pm-10pm
August 5- September 3, 2011
Three artists, Daniel Bruttig, Joe Cassan and Erin Thurlow will be sculpting, painting and directly intervening in the space of Antena gallery for their show, Renovation Creep. Simultaneously material and ephemeral, the work here resembles the haunted, transitory nature of urban apartment dwelling.
Renovation Creeps
History: We are, many of us, temporary occupants of someone else's property. For most people who live in cities, in fact, it represents the reality of the American Way of Life far better than the well-branded American Dream of home (house) ownership. It will most likely be an apartment, a collection of rooms 'distinguished' by a patchwork of occupant-renovations, handyman quick-fixes, cheap fixtures and bad paint jobs. The typical rental is a way-station for young up-and-comers, or a mortgage-free house for the lifelong renters. From the Victorian-era railroad, to the condo-style mod flat, each is home to a succession of denizens who leave behind a particular residential stain.
Palimpsest: A raw spot remains on a surface when a thing fixed there for a long time previously, is removed. It is anti-residue; clean space on an aged plane that has evaded the ruin of time. Move a picture frame that has hung for years on the too-long-unrepainted wall, and you will expose a lighter, brighter rectangle. This sort of mark shows along a floor after walls have been torn out, fixtures have been removed, and carpets pulled back. The minor spirits that remain, remind us that the apartment has had a history prior to our brief residence. Conversely, there is an organic quality to the gradual accumulation of paint, wall paper, and hole-filler that covers the walls, obscuring the details left from a more meticulous era. It is like a moss on the forest floor, covering the duff in a soft, uniform carpet.
Patina: The cabinets, some sort of revival in nineteenth century, frontier design, now just look anachronistic; plywood and melamine surfaces tarted up with Gothic drawer pulls and moulding. Worse, the details, narrow clefts and dimples, are caked and filled with a residue of dust (90% dead human skin), cooking grease and tobacco resin. Who knows how many Marlboros, fondue parties, cut fingers and splatted Yoplait Yogurts it took to create such a
(Also note: The jerry rigged wiring and fixtures that follow a succession of handymen, do-it-yourselfers and building supervisors resembles the growth of benign tumors.)
Labyrinth: Pull back the carpet or linoleum, scrape the wallpaper, remove a cabinet hung during a cheap renovation. What do you see? Another, older pattern of wallpaper? Pristine hardwood flooring, or urine-soaked, rotting press-board. Rip open a wall and you find a door behind it. Rather than unpainted drywall, the hole in the wall reveals another wall, floral wall paper graffitid with a handwritten grocery list. 'Your' flat is a labyrinth of histories, wandered by the ghosts of those who became lost there.