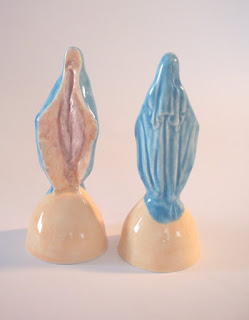 EXHIBITION STATEMENT
"Fascism … also stands for an ideal or rather ideals that are persistent today under the other
banners: the ideal of life as art, the cult of beauty, the fetishism of courage, the dissolution of
alienation in ecstatic feelings of community; the repudiation of the intellect; the family of man
(under the parenthood of leaders)." –Susan Sontag, Fascinating Fascism

This exhibition interrogates the seductiveness and glamour of evil. Evil, after all, is adept at
projecting a certain kind of charm. We cherish the antics of our TV and motion picture villains
in all their insouciant brutality and eroticized violence. But evil can also exert a subtle charm in
the allure of its ability to feign a release from life's problems. Accepting the Faustian bargain
of evil offerings requires a willingness to enter into a complicity with that evil, and to sacrifice
the ideals of the "good life" that we aspire to. It is arguable that consenting to evil is always an
intimate choice, with the goal of manipulating its victims into rejecting their own self-worth and,
in consequence, to giving away control over the direction of their own life-course, now subsumed
in service to evil. This can take place on the level of an intimate personal relationship, as in the
instance of a rakish seduction, or on the level of an entire culture, as the history of fascism has
shown.

Borrowing from a diverse range of artists from Filippo Marinetti, Rirkrit Tiranamija, Yves Klein
and Wyndham Lewis, the exhibition space will be converted into a domestic backdrop against
which objects, activities and more will form a totalized artistic environment. Visitors will be
invited to interact with this environment while performances are conducted in the manner of a
teatro totale. The question of the allure of evil will be interrogated both in objects that compose
the environment, in performances both interactive with the audience, and in those acted out
as if no audience were present. Video documentation of these performances will be presented
following their presentation, and presented thereafter as a documentary component of the
exhibition.

ABOUT ANTIDOTE PROJECTS
ANTIDOTE is a roving, independent curatorial and exhibition platform co-founded by Michael
Workman and Berlin-based sculptor Edouard Steinhauer in 2009. Conceived as an occasional
project-based initiative, ANTIDOTE does not take on artists for career representation, preferring
instead a collaborative approach to the cultivation of unconventional formal approaches to
audience engagement. ANTIDOTE serves as an independent curatorial platform to advocate for
and disseminate the works of underrepresented artists, specifically through special presentations
and exhibitions at art fairs, publications, educational programming, and other nontraditional
forms of curatorial programming, with an aim to exploring unorthodox distribution systems
for disseminating artist's works. ANTIDOTE only showcases artists who have been carefully
selected for visual work that consistently centers on the development of intricate imaginative
world or system-based constructions, dematerialization of traditional forms, and/or whose work
otherwise counters the purely object-based approach to art-making. As such, often these artists
have been overlooked by the art world, since their approach often problematizes the conventions
of or confounds audience expectations surrounding the industry's cultivated preference for
traditional object-based modes.