The Southkore Shall Rise Again

Southkore Records puts on the first-ever all-Spanish punk festival this weekend. Eric looks into how this came to be.

Rancho Huevos is a shoddy house in Bridgeport that sometimes puts on shows. Tonight, Treinta/Treinta is playing. It looks as if at any moment their singer Swave will bring down the supports with a swing of one of his massive arms. The crowd is a healthy mix of trad skins, gutter punks, regular joes, and some well-dressed spillover from the show at the Texas Ballroom down the street. The lineup includes half a dozen different flavors of punk, from political to skate punk to grindcore. The recently reunited Sin Orden are elder statesmen of the scene. Intifada, whose members are all still in high school, is one of the youngest. Condenada is a bilingual girl group with members of Reaccion and Human Order. The headliners are Hit Me Back, from Los Angeles, and Cinder, a skate-punk act from Spain.

That was a year ago.

The rash of venue closings that swept through the city last year did relatively little to affect the punk scene. Great venues like El Colibri, Transmission, the Needle House, the Crevice and the Command Center pop up and disappear so quickly that there's little time to mourn them. The average lifespan of a good punk house is only a year. It probably comes as no surprise that cops and landlords are no fans of loud music or liberty spikes and that a lot of punks have trouble making rent. According to Cris Balls, who lives at Huevos and plays guitar in No Slogan, "My experience is that every place I've ever lived in, you know going in that they're not going to renew your lease at the end of the year." 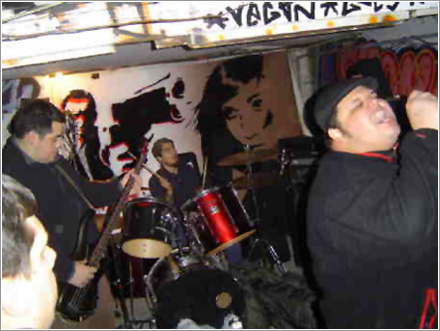 From the very beginning, Latinos have played an important role in shaping the sound of Chicago punk rock. In the late '60s, Santiago Durango's family moved to the city from Colombia. He would become one of the founding members of Big Black and Naked Raygun. It was Los Crudos, though, who emerged from Pilsen in the mid-1990s, that many American bands credit with inspiring them to sing in Spanish. Today, Chicago has one of the most vibrant Latino punk scenes in the nation, but it didn't come easily. When Southkore formed in the late 1990s, there was a general feeling that Southside bands weren't getting the same breaks as their contemporaries on the other side of the Loop.

All of the larger (or at least legitimate) all-ages venues in the city — the Fireside Bowl, the Metro, etc. — were on the North Side and whenever bands came in on tour, it seemed like they had all the same groups, coming from all the same places, opening up for them. Southkore began as a collective made up of members of bands from Pilsen, Little Village and Back of the Yards. Despite some initial success, they folded soon thereafter. With some people pulling the collective towards community activism, others towards the musical aspects of their neighborhood scene and still others refusing to work on anything but their own pet projects, there were simply too many members to get anything done.

A couple years back, a smaller Southkore decided to give it another try. While retaining their original goals, their main objective was to record the bands that had been playing for years and never been able to put out records. Their first release was a 7-inch of Non Fiktion Noiz, which wasn't ready until the band's final show. Sitting at a table at the Skylark on South Halsted, Benny Hernandez explains the problems with releasing the album, "Our white friends, and these bands on the North Side ask us why we don't go on tour more often. Why we don't put out albums quicker. They don't understand that we come from a different socioeconomic background, that a lot of us can't take off because we have to work to support not just us but our parents and our families." Swave adds, "And if you can imagine going on tour for four weeks or six weeks, when one of the guys in your band is undocumented, it's a logistical nightmare. Every one of us has had to put some bill on hold, pay the phone or the gas a month late to get these albums out."

Records by No Slogan and Eske followed, and then Ratas De Ciudad. Ratas was their first CD, a compilation of all the bands they'd spent the last few years recording. It was released at the first Southkore Fest, which took place in an old factory at the end of the summer in 2004. Due to a printer error, they had no inserts for the jewel cases and took down addresses, over three hundred altogether, at the door, so they could mail the booklets out later. The show featured about a dozen bands from the comp and the neighborhood, and even a couple friends from up North. The cops showed up a couple times when kids had wandered up to the roof, but were finessed away by Condenada's Mariam B, who then threatened to kick the shit out of anyone who caused them to return.

Over the next year the Southside scene exploded. Barriers dropped as Southkore teamed up with Criminal IQ for a holiday show at the Abbey Pub. Bands from the Pilsen/Little Village scene played alongside the likes of Caustic Christ and Kylesa, with legendary punk dinosaurs like the Subhumans and MDC, and with international bands like Skitsystem, Riistetyt and Gouka. Southkore even put out a couple albums by North Side bands like Fourth Rotor and the Pedestrians, and now two years after the first Southkore Fest, they're ready to put on a second.

This time, they're doing everything legit. The show will take place at The Black Hole, an arcade in Little Village, with a new theme. All of the bands playing Southkore Fest 2 are Latino. It is the first fest of its kind in the country and it's bringing in bands from as far away as Puerto Rico and the Dominican Republic. When I asked why Southkore would organize a fest that would exclude some of its own bands (like the Pedestrians and the Rat Bastards), Swave explained that Latino punk bands tend to get marginalized at festivals like this. Ten years ago, Los Crudos was the Latino punk band in the city, prompting them to write their only English-language song, "That's Right, We're That Spic Band.

"There won't be any 'token' bands at this festival, and you won't see the same bands you'll see everywhere else."

When I asked Benny the same question, he put it slightly less diplomatically. "This fest is like a big fuck you to white punk America, not only are we taking over your country but we're taking over your scene."

Southkore Fest 2 takes place at The Black Hole, 3045 W. 26th, on the 2nd and 3rd of June. In addition to the music program, there is a film program at Meztli Gallery, 556 W. 18th Street, on Saturday the 3rd, featuring the documentary "Beyond the Screams" and a talk with its director Martin Sorrondeguy (of Los Crudos and Limp Wrist). More information at www.southkorerecords.com.